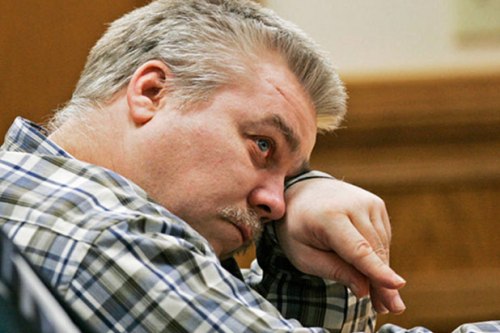 Right folks, I think it’s about time I talked about the hottest conspiracy theory around right now: the conviction of Steven Avery…

The Steven Avery case has dominated headlines and got tongues wagging in outrage all over the world since Netflix documentary series Making a Murderer aired last December. (Yes, there are significant spoilers for the series ahead, so if you haven’t watched it and you want to experience the outrage first-hand, do NOT read on.)

My housemate and I watched the series in January. As some of you know, I used to practise as a criminal defence lawyer. She still does. We therefore spent most of the series with our chins on the floor.

I have to say, it’s nice to see a programme that doesn’t paint the defence lawyers as baddies. Here we’re seeing the prosecution and the police in a dark and nasty light, something huge swathes of the public are ignorant about. Sorry guys, but having dealt with dodgy cops myself—cops who wilfully disregard procedure just so they can nail someone—I can tell you that many of them are not the knights in shining armour you think they are. And the Steven Avery case is one big, glaring example of that.

By way of background, Steven Avery is an American man whose family owned an auto salvage yard in Manitowoc County, Wisconsin. He served 18 years in prison after being convicted of the sexual assault and attempted murder of Penny Beerntsen in 1985. As it turned out, a notorious rapist called Gregory Allen—already under suspicion for other sex crimes—was overlooked by the Manitowoc County Sheriff’s Department. This is despite the fact that Penny Beerntsen’s description of her attacker matched Allen much more than it did Avery.

In 2003, the Wisconsin Innocence Project helped uncover new DNA evidence proving that Gregory Allen, lo and behold, was the perpetrator. Avery was released. This was the first sign that the Manitowoc County Sheriff’s Department is either completely incompetent or deeply corrupt.

Avery proceeded to file a $36 million civil lawsuit against Manitowoc County, the sheriff and the district attorney for wrongfully convicting him.

But shortly after filing the lawsuit, he was arrested again, this time for the murder of Teresa Halbach. Halbach was a photographer for Auto Trader, who Avery had called to photograph a minivan on his property. The prosecution’s gruesome tale was this: with the help of his nephew, Brendan Dassey, Avery kidnapped Teresa, tied her to the bed in his trailer, raped her, stabbed her, cut her throat, shot her in the head and burned her body. Making a Murderer explores the subsequent investigation, trial and conviction of both Avery and Dassey for these crimes.

Millions of people are now convinced that Avery and Dassey were framed as part of an insidious conspiracy at the heart of the Manitowoc County Sheriff’s Department and District Attorney’s Office.

What evidence exists of a police/prosecution conspiracy?

I can’t in the space of one article cover all of the evidence presented in Making a Murderer—or indeed the less important evidence that was cut out of the series. However, there are some major pieces of evidence that point glaringly towards a conspiracy to frame Steven Avery and by extension, Brendan Dassey.

The timing of Avery’s arrest for Teresa Halback’s murder is frighteningly obvious. He was in the process of suing the Sheriff’s Department for $36 million over his wrongful conviction, and suddenly he’s arrested for another crime. What are the odds? Many people believe that the police and the prosecution HAD to find a way to get rid of Avery. And I seem to remember Making a Murderer revealing that the officers involved in bungling Avery’s 1985 case could be personally liable to pay the damages. Avery gave a lot of people motive to dispatch him somehow, in order to make his lawsuit go away.

It worked swimmingly. Following Avery’s arrest, the civil suit was settled for $400,000, a fraction of the sum he’d initially sought.

To avoid a conflict of interest, the district attorney asked Calumet County rather than Manitowoc County to lead the investigation into Halbach’s murder. And yet the same officers from Manitowoc County who were instrumental in Avery’s wrongful conviction were involved in every stage of the Halbach case.

This has led people to accuse the Manitowoc County officers of tampering with evidence. In the case of the car key found in Avery’s trailer, the possibility is extremely compelling.

How could they have missed that? Well, they didn’t. Other officers testified that the key was not there on the previous searches. Colburn and Lenk said it must’ve been on/behind/within the adjacent cabinet, which Colburn shook on the sixth search, causing the key to drop onto the floor.

What a crock of shit, I say. What, they didn’t look inside, behind or underneath this cabinet on any of the six prior searches? They didn’t notice the key drop on the floor immediately when this cabinet was allegedly shaken? And how do they explain this magical flying key landing UNDERNEATH Avery’s slippers?

What’s even more blatant is that Avery’s DNA was found on the key, yet Halbach’s was not. How could that be if it was her key? Did the conspirators wipe it clean because they thought that would be the best way of planting Avery’s DNA? Was it even her key at all?

This was one of the most important pieces of evidence against Avery at his trial. But the conspirators royally botched it. The fact that a jury convicted Avery anyway just goes to the stupidity of the jury.

One of the most shocking revelations in Making a Murderer was to do with Avery’s blood, which was found in Teresa Halbach’s Toyota RAV4.

The car being found abandoned on Avery’s property with his blood inside were two extremely damning pieces of evidence against him. But his defence team weren’t convinced. In relation to the blood, it was smeared rather haphazardly in various places all over the car. Because Avery had a cut on his hand at the time of Halbach’s death, the prosecution used this to suggest that Avery had been in the vehicle.

However, what troubled the defence team was that while his blood was present, they couldn’t find a single one of his fingerprints. Suspecting that the blood had been planted, they investigated how such a thing was possible. It turned out the police still had a vial of Avery’s blood in an evidence box following his 1985 arrest. The defence team dug out the box and found that the seal on the box had been broken and resealed with scotch tape. And if that wasn’t blatant enough, they found a tiny hole in the top of the vial—like someone had extracted some of the contents with a hypodermic needle.

This astonishing piece of evidence is highly indicative of a conspiracy to frame Avery. Indeed it was presented as such during Avery’s trial, but a forensic test was done to prove that the blood in the vial was not the same blood found in the car.

However, the test didn’t actually prove this. They were looking for something called EDTA, a chemical that preserves blood. Basically it should’ve been detected in the blood samples from Halbach’s car if that blood had actually come from the vial.

But a forensic expert said in court that the fact that the test didn’t identify any EDTA proved two things: 1. There was no EDTA. 2. The test just didn’t pick it up.

In other words, the test proved nothing at all.

Halbach’s DNA, the location of the car and Brendan Dassey’s confession

What’s utterly ludicrous is that Avery was said to have raped and stabbed Teresa Halbach while she was tied to his bed, yet none of her blood or DNA was found anywhere in his trailer.

Then Avery was alleged to have shot Halbach in his garage. A single bullet was found on the floor, which was found to have Halbach’s DNA on it. But no other DNA was found. So the prosecution would have us believe one of two things. Either Halbach didn’t bleed or even shed a single cell when he shot her, or Avery cleaned up extremely thoroughly but left the bullet right there in the middle of the floor. Needless to say, the prosecution didn’t give either of those explanations. In fact, they gave no explanation at all.

The discovery of the car is another big issue, mainly because of the markedly dodgy Sergeant Colburn. Halbach’s RAV4 was found on Avery’s property on November 5th 2005. But two days before it was found, Colburn called in its number plate, something the police do when they stop someone or find an abandoned vehicle. The call strongly indicated that he was looking at the vehicle at the time. There is no reason why he would call it in otherwise.

The theory is this: Colburn and Lenk and their Manitowoc County cohorts found the car two days before it was “officially found” on Avery’s property. Then they planted it there to implicate him.

And oh my, where do I start on Brendan Dassey? That’s a whole other article in itself. But if you’ve seen his taped ‘confession’ in Making a Murderer, you’ll see that it’s probably the most unreliable confession in the history of the universe. At all times the officers were feeding Brendan the answers they wanted him to give, cajoling and bullying him into confessing. Anyone could see that Brendan, the poor lad, had all the brains of a doorstop and was extremely susceptible to suggestion. He needed an appropriate adult and a lawyer in the interview with him. He had neither. As a criminal lawyer who used to jump up and down in police interviews whenever the officers asked an inappropriate question, this was the most horrifying abandonment of police procedure and basic logic I’d ever seen.

Farcically this confession was ruled to be admissible at Dassey’s trial and this is the basis on which he was convicted. At the same time, the confession was ruled inadmissible at Avery’s trial. Avery was convicted on the basis that he’d murdered Halbach himself with no help from Dassey. Yet Dassey was convicted of raping Halbach and helping Avery kill her and burn her body. Thanks to Wisconsin’s preposterous legal system, two entirely different versions of Halbach’s murder have gone on record.

Will this conspiracy ever be exposed?

From everything I have seen, heard and read about Steven Avery and Brendan Dassey’s cases, there’s no doubt in my mind that both of them were framed. What really happened to Halbach I honestly don’t know. Some people think the police murdered her to set up Avery. I’m not sure I’d go that far. Lenk, Colburn and their cohorts are clearly corrupt, but would they really resort to murder to save themselves $36 million?

Actually, maybe they would.

Right now Avery’s new lawyer, Katherine Zellner, is preparing a fresh appeal and has pledged to expose the truth. For the last few months she’s been capitalising on the sympathy for Avery and Dassey after Making a Murderer, talking about new forensic evidence and even an “airtight alibi” that has apparently come to light.

Whether she’ll be successful in uprooting the corruption and injustice that currently rules Manitowoc County, only time will tell….

Next week: story updates and advice for writers on point of view