“We could blow up a US ship in Guantanamo Bay and blame Cuba.” Yes, these are the actual words of the US Department of Defence (DoD) and Joint Chiefs of Staff, part of a corrupt plan to start a phony war with Cuba.

The villain of a story is often its driving force and most interesting character. I think that’s why I’m drawn to conspiracy theories and conspiracy fiction. An unseen collective menace manipulating events and controlling people from behind the scenes is the most compelling, multifaceted and downright frightening villain in literature, TV and film.

However, while I love taking advantage of conspiracy theories for the purposes of writing Million Eyes and its linked short stories, I’ve always said that I don’t actually believe in many of them. Rather, I don’t have enough information to take up a position either way (well, apart from the totally whackadoodle ones like Flat Earth Theory and the Royal Family being lizards — if you read my blogs, you’ll know my position on those is pretty clear).

But then I come across Operation Northwoods, which takes the edge off my scepticism. Proves to me that government conspiracies can happen, do happen and probably are happening right now. Makes me look again at some of the claims made by conspiracy theorists, and wonder if they’re really as crazy as they sound.

Let’s remind ourselves what a conspiracy is. It’s a plot by two or more people to do or cover up something harmful or criminal.

That’s exactly what Operation Northwoods is. The most alarming thing about it is that those “two or more people” are some of the most senior members of the United States government.

In 1962, a memorandum entitled “Justification for US Military Intervention in Cuba” was drawn up by the DoD and Joint Chiefs, signed by the Chairman of the Joint Chiefs, Lyman Lemnitzer, and submitted to the Secretary of Defence. The memorandum proposed Operation Northwoods, which called for US government operatives to commit acts of terrorism against innocent civilians and military targets, which they would blame on the Cuban government and use to justify a war against Cuba.

The document was kept secret for decades and finally made public on 18th November 1997 by the John F. Kennedy Assassination Records Review Board. It was eventually published online by the National Security Archive in 2001.

The US and Cuba were not on good terms in 1962. Fidel Castro had forcibly removed Cuban president and dictator Fulgencio Batista and assumed power as Cuba’s Prime Minister. He established an alliance with the Soviet Union, which made the US government wet their pants. So they tried to oust Castro by assassination, an economic blockade and the botched Bay of Pigs Invasion in 1961.

Then came Operation Northwoods, a rather more extreme plan. The objective was to “place the United States in the apparent position of suffering defensible grievances from a rash and irresponsible government of Cuba and to develop an international image of a Cuban threat to peace in the Western Hemisphere”.

In other words, the government wanted to make Cuba look bad and dangerous enough that the American people would support bombing the bejesus out of them.

The memo included plans for fake attacks on the Guantanamo Bay Naval Base, including burning aircraft, damaging installations, starting pretend riots and sabotaging ships. They planned to blow up an unmanned ship in Cuban waters and pretend it had people on board. They actually said this:

“Casualty lists in US newspapers would cause a helpful wave of national indignation.”

The DoD and Joint Chiefs also suggested faking attacks on US military jets and a passenger airliner full of college students and making it look like the Cubans did it.

The above mentioned plans were designed to be ones in which no one was actually harmed. But then came the most chilling part of the memo, Proposal No. 4:

“We could develop a Communist Cuban terror campaign in the Miami area, in other Florida cities and even in Washington. The terror campaign could be pointed at Cuban refugees seeking haven in the United States.” 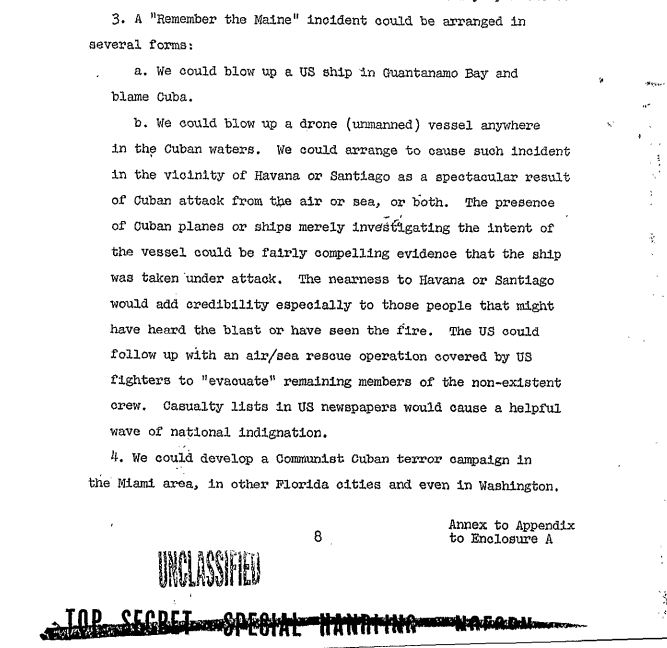 Here’s where things get really dark.

“We could foster attempts on lives of Cuban refugees in the United States even to the extent of wounding in instances to be widely publicised.”

“We could sink a boatload of Cubans en route to Florida (real or simulated).”

Yes, these are senior members of the United States government proposing this.

Fortunately the plan was shot down by President Kennedy before it could be put into action. But that doesn’t give me much comfort, the final cog in the decision-making machine refusing plans that all the other cogs think are fabulous ideas. Luckily he saw sense to go against all his highest ranking officials, but if JFK had been more gung-ho about Cuba, Operation Northwoods might’ve actually happened.

Gung-ho like, say, President George W. Bush. The man repeatedly accused of being the true evil behind the 9/11 terrorist attacks.

The idea that the government could be willing to orchestrate terrorist attacks on its own soil doesn’t sound so crazy now, does it?

The full text of the Operation Northwoods memorandum can be read here.