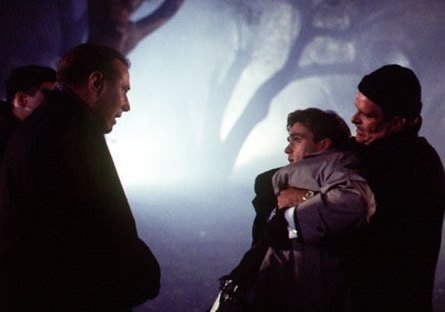 The last article I wrote about the Roswell UFO Incident assessed the claims that alien bodies were recovered from the crash sites. Now I’m looking closer at why people believe there was a government cover-up…

The Ragsdale burglary and the death of Trudy Truelove

Remember Jim Ragsdale? He’s the one who said that he and his girlfriend, the wonderfully named Trudy Truelove, discovered a crashed spaceship in the desert in the Roswell region in 1947, together with alien bodies. They gathered up some of the wreckage and tossed it into their truck, before speeding out of the vicinity when a huge military recovery team turned up.

The debris didn’t spend long in Jim and Trudy’s hands. Apparently Trudy had some of the debris in her car and months later, her car hit a bridge and she was killed. When the car was brought into town, the debris from the spaceship was gone. Did someone bump her off? Jim also alleged that his truck, which still contained some of the debris, was stolen, and his house, where he kept the rest of it, was broken into and ransacked. The burglars stole the debris and a gun.

Did the government get wind of Jim and Trudy having possession of pieces of the spaceship and decide they needed to get it back?

Or did Jim – who has since been widely discredited by researchers – make up this story to explain why he had no debris that could be tested? That there never was any debris, any crash, any alien bodies or any Trudy Truelove?

Let’s not forget Glenn Dennis’ mysterious nurse, identified by him as Naomi Self. Self told Dennis she had taken part in an alien autopsy and then, according to him, she was killed in a military plane crash.

The problem with Glenn Dennis is that research proved that Ms Self didn’t exist. No records of this plane crash were found. Dennis proceeded to change his story multiple times. Faith in his story evaporated.

But is it quite as clear-cut as that? Apparently David Wagnon, a Roswell base medical technician in 1947, signed an affidavit saying that he remembered the nurse that Dennis described…

So did the government go to elaborate lengths to erase her existence?

The suicide of Miriam Bush

At the time of the Roswell incident in 1947, Miriam Bush was employed as a medical secretary in the hospital wing of the RAAF base. One day in the summer of 1947, her relatives recalled her returning home in a terrible state. She said she had witnessed a number of “little bodies” on gurneys in a base hospital room. Bodies that were childlike but had massive heads and eyes and did not look normal at all.

After the incident, Miriam left New Mexico, cut off contact with her family, became an alcoholic and committed suicide in 1989.

The intimidation and coercion of William ‘Mac’ Brazel

Mac Brazel is the one who first discovered the wreckage of what the military said was a weather balloon on his ranch. He did an interview with the Roswell Daily Record, published on July 9th 1947, describing what he’d found and expressing regret at receiving so much attention.

However, there is evidence that Mac Brazel was actually detained by the military at the RAAF base for a week during this period, and that his testimony to the Roswell Daily Record may have been coerced.

Brazel’s son Bill Junior said his father had expressed bitterness and upset about being “put in jail” for a week for doing a “good deed”. Other family members said he was particularly angry that the military had forced him to undergo a head to toe physical examination before they would release him. Some family members said he’d been sworn to secrecy about what he really saw at his ranch, and that his family had been threatened.

Neighbours and friends also attested to Brazel’s incarceration. Marian Strickland said he had moaned to her about being detained by the military, and that he wasn’t supposed to talk about what he’d found.

His nearest neighbour Floyd Proctor also confirmed that he had been detained for a week, and that Brazel was cagey about talking about it afterwards. He preferred just to repeat what he’d said to the Roswell Daily Record. Proctor actually said he had seen Brazel in Roswell during the period of his detention, walking down the street accompanied by half a dozen military escorts.

The problem is, all of this is hearsay, which means it’s very difficult to know what’s true and what’s embellished to make the whole thing look like a government cover-up. Plus, if the military dictated what Brazel said to the Roswell Daily Record, why would they let him make the following statement in his interview?

“I am sure that what I saw was not any weather observation balloon.”

Was a cover-up orchestrated by Majestic-12?

Controversial documents that came to light in the 80s detailed that President Harry Truman had authorised the creation of Majestic-12 for the purposes of investigating and concealing alien activity. The documents listed its members and mentioned that a UFO had crashed in Roswell, New Mexico in 1947. I wrote about this group a few months ago, in my article about the ‘real’ Men in Black, suggesting Majestic-12 as a possible source of some of the Men in Black sightings.

The Majestic papers spoke of how the Roswell UFO crash had been concealed (see below). They also talked of how the government could exploit the alien technology that was recovered, and discussed future US engagements with extraterrestrials. 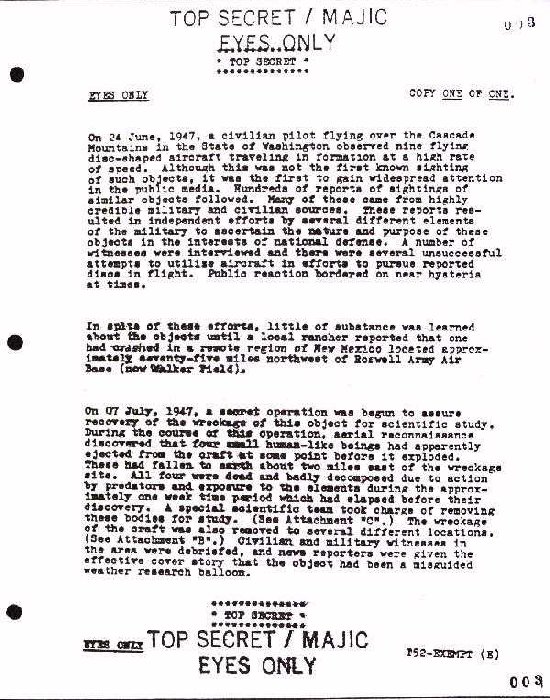 Fascinating stuff, but the consensus amongst virtually everyone – including ufologists – is that the Majestic-12 documents are part of an elaborate hoax (well, apart from the website, Majestic Documents, which continues to stand by their authenticity).

Then again, if Majestic is nothing more than a hoax, who are the hoaxers? To this day, no one knows who wrote the Majestic documents…

The only thing that seems clear to me from all this is that the witness intimidation stories and cover-up allegations are steeped in lies and hearsay.

But that doesn’t mean to say there isn’t some truth in there somewhere… After all, a lot of Mac Brazel’s family and friends contend that he was incarcerated by the military and coerced. There is still some support for the story of Glenn Dennis’ mysterious nurse. And what of Miriam Bush, who was, according to her family, deeply disturbed when she saw bodies with oversized heads and eyes at the RAAF base?

Next week: a Valentines special…