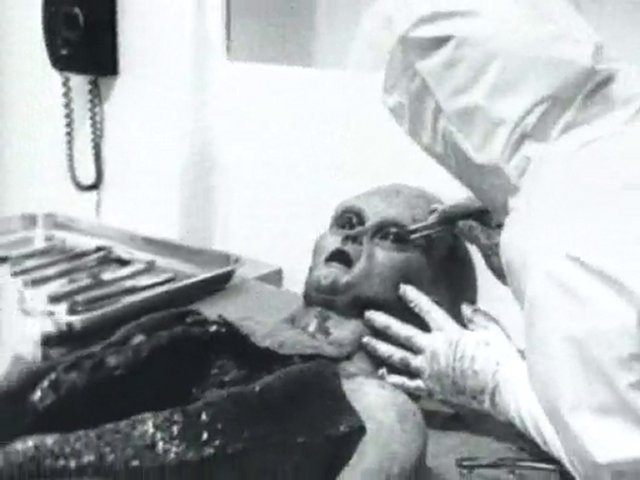 My last Roswell article looked at the events which caused the 1947 incident to become the world’s biggest conspiracy theory. Now I’m looking more closely at the sightings of aliens at the crash site, and alleged alien autopsies…

Last time I looked at two people – Glenn Dennis and Jim Ragsdale – who made claims about the presence of alien bodies at Roswell. Their stories have since been widely discredited, but there were others…

Anderson and Barnett – the other crash site

Gerald Anderson told his story to UFO researchers Stanton Friedman and Kevin Randle in 1990. He said that he was five years old when, in July 1947, he, his brother, father, cousin and Uncle Ted all happened upon a crashed spaceship in the Roswell region. But this was at a different site from Mac Brazel’s ranch. Confused? Yes, apparently there were two crash sites – perhaps the spaceship split in two? It was made of tin foil and scotch tape after all.

Anyway, Anderson’s lot found the ship’s four passengers, who were small, non-human beings with large, oval-shaped, milky-blue eyes. Shortly afterwards, a number of students and their professor joined them, having been studying nearby. Then a man called Barney Barnett joined them. Finally, the military turned up.

I know. Good memory for a five year old, isn’t it?

Perhaps not so good. Anderson gave a further interview, and several details changed; in particular, the aliens’ “enormous” eyes were now “very black” instead of milky-blue. Over time, Kevin Randle decided Anderson wasn’t credible. In turn, Anderson tried to attack Randle’s credibility by producing a phone bill proving that Randle was lying about the length of their original phone call. Anderson argued that it was actually a lot shorter than Randle had made out. Then another researcher proved that Anderson had falsified the phone bill. Oops.

Anderson also turned over a diary written at the time by his Uncle Ted to support his story. Turned out this diary was a tiny bit faked, too. It was riddled with inaccuracies and written in a type of ink that hadn’t been invented in 1947 or indeed until after Uncle Ted had died. Double oops.

Suffice it to say, Anderson’s tales are today considered exactly that. Tales.

Then there’s Barney Barnett, mentioned by Anderson in his story. Barnett died in 1969, so his account of the incident came second-hand from his family. He told them that he came upon a group of people he thought were archaeologists and saw them looking at dead bodies and a metallic object sticking out of the ground. The bodies had odd-shaped, hairless heads, small eyes and wore silver jumpsuits. Later the military turned up and cordoned off the area.

A few problems here. Firstly, the account is second-hand hearsay, and there’s no way of knowing how contaminated the account might be. Secondly, Barnett didn’t say anything about Anderson or his family even being there.

Thirdly, anyone notice that these aliens’ eyes keep changing size?

In the 1990s, a 17-minute black and white film surfaced, allegedly depicting the autopsy of an alien recovered from one of the Roswell crash sites in 1947. Apparently the film footage was supplied by an anonymous retired military cameraman to London-based entrepreneur Ray Santilli. It was widely publicised in a 1995 documentary, broadcast on Fox television. 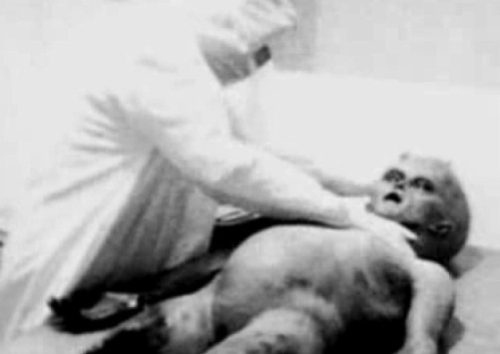 But more than ten years later, Ray Santilli made a shocking confession (well, shocking to some people, I suppose). He admitted to faking the footage in a 2006 documentary presented by Eamonn Holmes, which was shown on Sky TV. He and his fellow producer Gary Shoefield admitted they had constructed a set in an empty flat. They had employed a sculptor to build an alien dummy with casts containing sheep brains and raspberry jam. And the sculptor had played the role of the chief examiner doing the autopsy.

End of story, then. It was all a hoax, a fabrication, a fake.

Well, that’s not exactly how Santilli puts it. In fact, he referred to his film as a “restoration”. He explained that the real footage of the alien autopsy, which he initially viewed in 1992, was too badly degraded by the time he had the money to purchase the film. So he re-enacted what he had seen. He claimed that a few frames from the original film made it into his “restoration”, though – conveniently – he never identified which ones.

Just last month, various newspapers reported that a UFO expert called Tom Carey was claiming to possess an authentic image of an extra-terrestrial, taken following an autopsy in the top-secret Area 51. This image, showing a partly dissected alien lying in a case, was allegedly passed to Mr Carey by a US intelligence agent. It’s also apparently been confirmed by Kodak to be from 1947, the implication being that it’s from an alien autopsy following the Roswell incident. However, the image itself doesn’t appear to have been made public, and UFO researchers like Nigel Watson are doubting it already. The likelihood is that it’s another hoax!

Looks like most of the evidence for alien sightings at the Roswell crash sites doesn’t hold up to much scrutiny. But what about all the allegations of witness intimidation by the government, Men in Black and an elaborate cover-up by shadowy organisation Majestic-12?

That’ll have to wait for next time 🙂

Next week: I’m doing a ‘Top 10’ list of conspiracy movies and TV shows. See you on Christmas Eve!