Evening all! I have come up for air following two weeks of total immersion in the final edit of my forthcoming conspiracy novel, Million Eyes. In this week’s blog, I’ll share where I’m at with everything and talk about my time at South House Retreat near Dorchester, Dorset.

By the end of the two weeks I spent at South House Retreat, I’d got through 43,000+ words of the final edit of Million Eyes, which is just over halfway. This involved editing, rewriting and one new chapter written from scratch. Parts of the earliest chapters had not had an edit for almost two years, and given how much my writing has improved in that time, they needed quite a heavy do-over.

The main issue was with one of my main characters, Gregory Ferro. For a while I’ve been struggling to picture him, struggling to feel like I know him. The breakthrough occurred a few weeks before my retreat, when I decided to change the character’s religion. Weirdly enough, a new personality — one that, despite not sharing the character’s beliefs, I could identify with more — seemed to flow quite organically from that decision.

I also added a new chapter from Gregory Ferro’s point of view to the early part of the book, just to fill in some plot gaps.

Once these early chapters were done and dusted, the pace of the edit started to increase, and the later chapters I was flying through by comparison. I’m expecting this to continue as I edit the rest of the book (apart from one chapter that, following feedback from Rushmoor Writers, requires more historical research).

So I have set myself a deadline of August 31st to finish the whole book, which means setting aside a few Million Eyes-focused days each month. In general, copywriting has to take priority, since that’s what pays the bills (until, you know, Million Eyes makes me famous and rich and all that). Having said that, that’s the good thing about being a freelance writer — my hours are my own! The next thing will be whether I actually make my self-imposed deadline. That’s the plan, and anyone who knows me will tell you that I’m pretty determined.

I embarked upon my final edit of Million Eyes at a place called South House Retreat, a charming and enormous 200-year-old house set amid the rolling hills of Dorset. What a place, and what lovely, fascinating people who run it — Tracy and Martin Willoughby. Tracy’s a publisher author and Martin’s a painter. More on them shortly.

My bedroom was bigger than many people’s living rooms. I had Room 1, a gorgeous room with tons of historical character and two windows offering completely different views. One was of the River Piddle and the gently ascending hills beyond it. (Funnily enough, this river’s chuckle-inducing name is quite apt. It’s tiny, more of a stream really, but Tracy mentioned that you mustn’t call it that — the locals are rather protective of their ‘river’!) The view from the other window looked out across a field of horses, with a cottage and hills in the distance. Talk about idyllic. 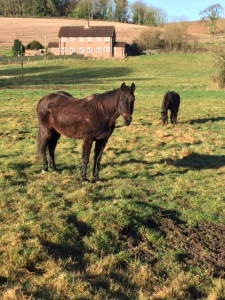 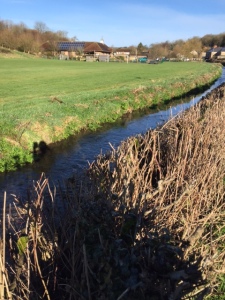 I had my own bathroom too. A huge one, with a bath and a separate shower. Not an ensuite, but I wouldn’t expect that in a house as old as that one. In the last writers’ retreat I went to, I had to share a bathroom. I didn’t really have an issue with that, but it was—admittedly—much nicer to have one to myself.

I went full-board, which at £80 a night with 20% off because I was staying more than 7 nights, was very good value. For that I got three meals a day, unlimited tea and coffee, cakes and snacks during the day if I wanted (but I was so well-fed during mealtimes that wasn’t necessary!), wine every night with dinner, and use of the hot tub (yes, they have a hot tub). Tracy even put some laundry on for me halfway through my stay.

While it all sounds beautiful and tranquil and relaxing — and it was — I was there to work. With no TVs, no noise or distractions, and all your meals cooked for you, I was able to put in a lot of hours. Most days I was working 12-13 hours, mostly up in my bedroom, occasionally by the open log fire in the guests’ living room. After my first 5-6 days, I realised I was burning myself out, not getting enough sleep, and I had to cut back a bit and get an early night, which completely refreshed and re-energised me for the next week. I did handful of country walks in the mornings to blow away the cobwebs and get some exercise, a little reading, occasional timeout with Netflix when I needed a break from words, and three dips in the hot tub. Otherwise, I was solidly at my desk, fully immersed in Million Eyes.

I also did some readings to Tracy, who was really accommodating and eager to hear my work, despite having her own writing to be getting on with. I read the opening chapter to her and some of the early chapters with Gregory Ferro and my other main character, Jennifer Larson. I particularly wanted to run past someone the new iteration of Ferro. I got glowing feedback from her. She commented that I really seemed to know my characters, which was especially good to hear after the problems I’d been having with Ferro.

I was extremely well-fed too. I actually think my waistline has expanded. Breakfast involved cereals, fruit, yoghurts, tea and coffee, and a full English. They don’t do sausages, but you get more or less everything else. I tended to have bacon, eggs and mushrooms, and Tracy cooked me a delicious omelette on three or four mornings as well. Lunches tended to be homemade soups with bread, cheese and crackers, sandwiches, and on one occasion, I had leftover meatballs from the night before — yum! (I warned her how much of a carnivore I am.)

Dinners varied from slow-cooked beef (my favourite) to bacon-wrapped chicken to fishcakes, rounded off with sorbets, pies, homemade chocolate brownies and fudge cakes, served warm with ice cream, and pancakes. And Tracy will take into account not only dietary requirements, but likes and dislikes where possible as well. One dinner involved an abundance of sweetcorn (and I hadn’t warned her of my aversion to the little yellow pimples from Hell), and for the remainder of my stay, I didn’t see a single kernel. 🙂

Last but not least, Tracy and Martin were both incredibly welcoming, warm and fascinating to talk to. They’ve had extremely colourful and eventful lives, full of stories both funny and sad, and Tracy has a wealth of writing experience to share with budding authors like myself. She’s self-published and traditionally published several novels, writes reviews for the Dorset and Hampshire Food and Drink Guides, and is working on a book about writers and the writing process.

I’ll definitely be going back. Not sure when or for what purpose yet, as my focus now is on finishing the final edit of Million Eyes, then looking for agents and publishers and trying to make Million Eyes into a success. But I thought South House would be a great place to start my next novel—whether that’s the sequel to Million Eyes (currently only in draft form, but the plan is to write that next if the first book is successful)—or another novel entirely.

In the meantime, I recommend a trip to South House for writers everywhere! And while they do offer B&B and half-board options, I think the full-board, all-inclusive package works best for writers. It just means you don’t have to go anywhere or worry about anything. Bar actually eating, all of your time can be spent writing. And as someone at my writers’ group said last night, for a writer, there is no better fun to be had by yourself.

And if that made you think of something else… get your head out of the gutter! 😀

Next week: mysterious microscopic parasites are controlling our brains — and it’s all because of cats