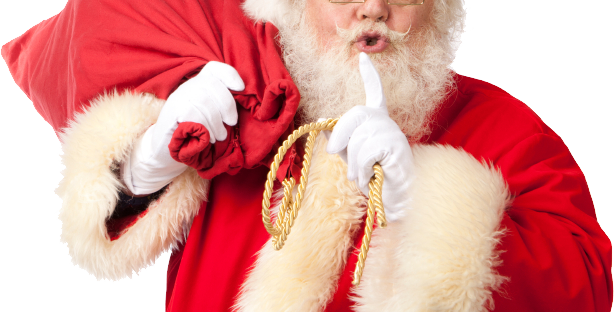 Forget stockings and presents and candy canes this Christmas. What about a bottle of bone discharge from the body of the “right jolly old elf” himself?

The miracle of manna, it’s called. Manna is the name of the sweet-smelling liquid supposedly coming out of the bones of Saint Nicholas, the gift-giving, 4th-century Greek bishop on whom the legend of Christmas Eve’s busiest man is based. It’s a liquid that apparently has robust healing powers. Every May 9th, the “Santa Manna” is removed by priests from St Nick’s tomb at the Basilica of St Nicholas in Bari, put in glass bottles and sold to pilgrims. It is then consumed as a drink or poured over an injured body part.

The original mince pie scoffer earned a reputation in the 4th century for secret gift-giving. Legend has it that he famously helped a poor man with three daughters, who couldn’t afford a dowry for them to get married. Nicholas delivered 3 bags of gold coins to the poor man by dropping them down the chimney (so that he couldn’t be seen). One of the daughters had just washed her stockings that evening and hung them over the embers to dry, so the bags of coins ended up falling in the stockings.

When St Nicholas died on December 6th 343, he was buried in the ancient Greek town of Myra in what is now Turkey. It was said that his relics in Turkey produced fragrant oil that healed all those who touched them. Then, in 1087, Italian sailors nicked St Nick from his own tomb and brought him to Bari in Italy. To this day, the rights to Santa’s remains are a ‘bone’ of contention between Italy and Turkey.

When St Nick’s bones arrived in Italy, they apparently continued to ooze liquid. In the 900 years since, they’ve been examined only once, in 1953. The bones were measured and x-rayed and were allegedly perspiring so much that the linen cloth used to hold them was soaking wet.

Funnily enough, some of St. Nick’s smaller bones made it to a church in Venice after they were stolen, and those bones don’t leak. Or at least they don’t anymore. The Venice church believed that they used to secrete manna, because they had a bottle of it dating back to the 1100s. However, scientists discovered in 2002 that this was actually a bottle of vegetable oil!

Could the holy bone juice be seawater or condensation?

Nobody knows for sure where the liquid comes from, though scientists are pretty clear that the bones themselves aren’t miraculously secreting it. Instead, it’s thought that the liquid might be seawater transferred to the tomb by capillary action, because the tomb is below sea level.

Alternatively, it might simply be humidity causing it, and the priests are actually collecting condensation.

Sounds a bit tastier than drinking Santa Claus’s bone discharge (but personally I’d rather a lump of coal in my stocking this year, if it’s all the same).

Still, the May 9th ritual persists. Here’s a video of a priest extracting “Santa manna” in 2012 and letting lots of people kiss the bottle (as you do).

And here are some crabs extracting “manna from heaven — sweet nectar of life” from a damaged sewer pipe, which is almost as funny as the priests. Almost.

Next week: an interview with filmmaker George Clarke about the ‘Charlie Chaplin Time Traveller’