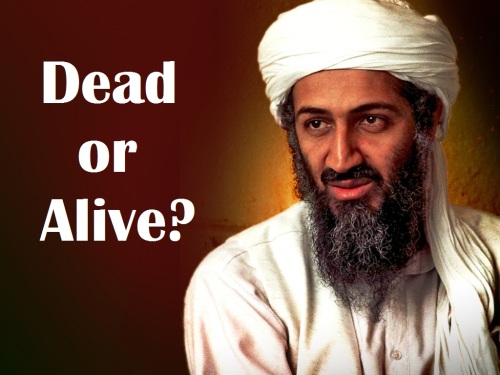 Osama bin Laden, architect of the 9/11 terrorist attacks (unless you believe the conspiracy theories), was killed in Pakistan on May 2nd 2011 as part of a CIA-led operation — wasn’t he? Not everyone’s satisfied that we’ve seen or heard the last of him…

It was headline news worldwide when US Navy SEALs took out Al-Qaeda leader Osama bin Laden as part of Operation Neptune Spear, almost 10 years after he orchestrated the world’s deadliest terrorist atrocity.

We all remember it. But what stuck out then — and still does now — is how shrouded in secrecy bin Laden’s death was. It was all telling, no showing. We all wanted to see an image of the monstrous mass murderer’s dead body. But not a single photograph was released by the government. No DNA evidence was released to the public either. And to top it off, he was hastily buried at sea within 24 hours of his death.

Navy SEALs conducted a raid on Osama bin Laden’s compound in Abbottabad, Pakistan. Bin Laden peered through his bedroom door to see the SEALs advancing up the stairs. Lead SEAL Robert O’Neill fired a shot at him that either missed or hit him in the side. Bin Laden retreated into the bedroom; O’Neill and the SEALs followed.

According to O’Neill, bin Laden was in the bedroom using a woman as a human shield. He had his hands on her shoulders and was pushing her forward. O’Neill was able to shoot bin Laden twice in the forehead, then again as he crumpled to the floor. Another SEAL, Matt Bissonnette, also claims to have fired shots into bin Laden’s fallen body.

The SEAL leader radioed, “For God and country—Geronimo, Geronimo, Geronimo” and “Geronimo E.K.I.A”, which means “enemy killed in action”. Watching the operation from inside the White House Situation Room, President Barrack Obama said simply, “We got him.”

Obama decided not to release any photos of the raid or bin Laden’s body. He said he wanted to make sure that “very graphic photos of somebody who was shot in the head are not floating around as an incitement to additional violence, or as a propaganda tool”. Subsequently, 52 post-mortem images classified as “top secret” by the Obama administration were ruled exempt from disclosure under the Freedom of Information Act (FOIA).

The photos were reportedly pretty gory. Sources told CBS Evening News that one photo showed that a bullet had blown out bin Laden’s left eyeball and a large portion of his skull, exposing his brain.

Again, though, all telling, no showing. Tons of organisations filed FOIA requests for the release of photographs, videos and/or DNA test results, with the Associated Press arguing, “This information is important for the historical record.” All requests were refused.

Okay, so Obama’s concern was that the release of graphic photos might inflame anti-American sentiment in the Middle East. But why not release any DNA test results? For nearly 10 years, the world had been waiting for this monster to be captured or killed. Why wouldn’t you want to substantiate the killing as strongly and fully as possible? Why leave the public so unsatisfied, or questioning whether it even happened at all?

And the quick-sticks burial at sea? According to the US military, bin Laden needed to be buried within 24 hours, according to Muslim practice, and no arrangements could be made with any country to bury him in that time. This is baffling to me. Why would the US military care about Muslim tradition in respect of Osama bin Laden? Bin Laden wasn’t a Muslim. He was an extremist and a terrorist.

What’s more is that the US hasn’t, in the past, been so concerned about Muslim practice. The bodies of Saddam Hussein’s sons were held for 11 days before being released for burial.

Some have argued that there were other reasons for the burial at sea. An identifiable grave site might’ve become a focus of attention or a “terrorist shrine” for extremists; a burial at sea prevents that.

But conspiracy theorists contend that a burial at sea is a neat and tidy way of avoiding questions.

“If you believe the newest death of OBL, you’re stupid. The only proof of him being dead again that we were offered was Obama telling us that there was a DNA match between the man killed by the Navy SEALs and OBL. Even if it is possible to get DNA done so quickly, and the regime did have bin Laden DNA lying around a lab somewhere — where is the empirical proof?”

On Russia Today, radio host Alex Jones said that bin Laden had been dead for almost ten years, his body kept in liquid nitrogen so that it could be used at a politically expedient time. A Turkish politician, Berkan Yashar, said that bin Laden died of natural causes in 2006 and was buried, and the Americans dug up his body to pretend that he’d been killed in an assault. And Hamid Gul, former head of Pakistan’s Inter-Services Intelligence, said in an interview with CNN that bin Laden died many years ago, and the American government knew it. He said that they were waiting for the right moment to tell the world he was dead, such as President Obama’s impending re-election in 2012.

Similar views were expressed on blogs and social media, i.e. that the raid and the killing were faked to boost Obama’s approval ratings in time for the 2012 election.

Or is he still alive and sipping cocktails in the Bahamas?

An article dated 25th August 2015 published by World News Daily Report claimed that NSA whistleblower Edward Snowden had disclosed that Osama bin Laden was living lavishly in the Bahamas on the CIA’s payroll. Snowden alleged that bin Laden’s death was faked for propaganda purposes. In May 2016, a number of Facebook pages and news sites repeated the claims from the World News Daily Report article.

When will they ever learn.

World News Daily Report is a hoax site that has caught people out before and even sparked modern day urban legends (like the Andrew Carlssin time travel story). They actually have a funny disclaimer on their website admitting that their articles are fictional. Come on, people. Do your research.

I think, personally, that Osama bin Laden is dead. I don’t think the US government would just give up hunting him. But do I think that he died on May 2nd 2011? Or much earlier, so that reports of his death could be timed just right? That’s a harder question to answer.

A lot of people across many different arms of the government would have to be party to this cover-up if there is one. The CIA; the Obama administration; the Navy SEALs; the US military; the members of Congress who said they saw the photos of bin Laden’s body; the courts who agreed that the photos couldn’t be released. Is it possible that ALL of these people could be lying? Mmmm. I’m not convinced.

I do also think that there were believable reasons for not releasing the photos and for burying bin Laden at sea (though I’m slightly bemused about why the DNA test results weren’t released).

That being said, I for one am sad that I haven’t been able to see the bastard with a great big gaping hole in his head.