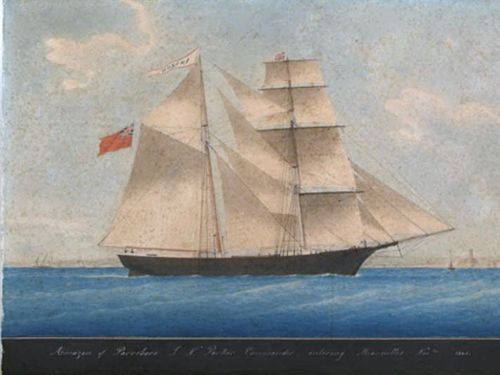 The vanishing crew of the Mary Celeste is one of the biggest maritime mysteries in history. The Bermuda Triangle’s been blamed before, but is usually dismissed because the ship’s route didn’t pass anywhere near it. Could it be that whatever’s been swallowing ships and planes in the Triangle… moves?

On November 7th 1872, the cargo ship Mary Celeste set sail from New York City to Genoa, Italy, carrying 1701 barrels of raw commercial alcohol. The captain was 37-year-old Benjamin Briggs. His wife Sarah and 2-year-old daughter Sophia were with him, along with a crew of 7, making a total of 10 people on board.

On December 4th 1872, the Mary Celeste was discovered adrift near the coast of Portugal by the British Empire vessel Dei Gratia. It was still under sail, but not a single soul was on board.

The reason this empty ‘ghost ship’ has become so famous is that there were no real clues as to where the crew had gone and why. The ship was still stocked with 6 months’ worth of food and water. The cargo of alcohol was intact (but for a handful of barrels that were thought to have leaked). And everybody’s personal belongings, including valuables, were undisturbed.

The Dei Gratia discovered that the ship’s single lifeboat was missing, suggesting the crew had urgently abandoned ship. However, no lifeboat was ever found and researchers today are still baffled as to why they would’ve left.

A few of the common theories…

Piracy
Some have speculated that the Mary Celeste crew were murdered by North African pirates and thrown overboard. However, no piracy incidents had been reported in the area for a decade, and what pirates would attack a ship but not touch any of the cargo or valuables? Plus, there was no sign of violence on board.

Insurance fraud
There were suspicions at the time that the ship was over-insured and deliberately wrecked for the purposes of a fake insurance claim. However, this was an unfounded conspiracy theory and no evidence of foul play was ever found.

Storm
When the Mary Celeste was found, there was a fair bit of water sloshing about below decks and in the hold and only one of the water pumps was working. This led some to speculate that the ship was hit by a storm and Captain Briggs ordered everyone to abandon ship before it sank. The problem with this theory is that the water level wasn’t significant enough for a captain to order evacuation, and the ship was in pretty good nick and still seaworthy. Stranger still, there hadn’t been any reports of a storm in the region.

All the down-to-earth theories are unsatisfactory, which is why there are plenty of extraordinary ones. Were the crew abducted by aliens? Did they fall into a parallel universe? Did they encounter a temporal rift and slip forwards or backwards in time?

The detail of the missing lifeboat cannot be ignored. What’s more is that even though the crew’s personal belongings were left behind, the ship’s papers and the captain’s navigational instruments were missing. It seems to me that something happened to make Captain Briggs get on that lifeboat with his family and crew in serious haste, snatching up his navigational instruments to be able to guide them ashore.

The question becomes, what was that something? And where on Earth did they go afterwards?

Does the Bermuda Triangle… move? 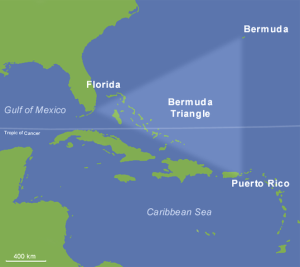 Now the Bermuda Triangle is a pretty contentious phenomenon. It’s a loosely defined area of the North Atlantic Ocean, generally regarded as between Florida, Puerto Rico and, er, Bermuda. It’s where numerous ships and planes are said to have vanished inexplicably, most notably Flight 19 and the USS Cyclops. However, according to scientists, researchers and the US Navy, it doesn’t exist. It’s said that writers have exaggerated or fabricated a number of Bermuda Triangle disappearances in order to build up this myth of strange and unexplained phenomena in the region.

One of the arguments against the existence of something fishy in the Bermuda Triangle is that many of the claimed disappearances didn’t actually happen there. The Mary Celeste has been linked to the Bermuda Triangle, but the ship was sailing between New York and Italy and it would’ve been a significant detour to pass through the Triangle.

Similarly, the unexplained disappearance of Henry VII-commissioned explorer John Cabot in 1498 has been linked to the Triangle, but most historians believe he wouldn’t have sailed through the region (having said that, nobody knows where he ended up, so some argue that he was dragged off course and into the Triangle).

In addition, there’s Christopher Columbus’s famous encounter with strange lights and a miraculously rising sea that caused his compasses to go skewiff in 1492. This is said to have taken place in the Bermuda Triangle region, but there is evidence to suggest that it actually took place closer to the Canary Islands, where he set off.

Thing is, what if we’re looking at the Bermuda Triangle all wrong? Perhaps whatever phenomenon exists there, be it an electromagnetic anomaly, temporal rift or alien teleportation field, is not just there. Maybe it moves. There have been tons of other unexplained disappearances all over the Atlantic and Pacific Oceans. Take, for example, the MV Joyita, a vessel found adrift in the South Pacific in 1955, its 25-strong crew all missing. No explanation for their disappearance has been established and the incident has since been labelled a “marine mystery of Mary Celeste proportions”.

What if all these ocean-based vanishings could be attributed to the same phenomenon?

Alas, there’s an old proverb: the sea never gives up its secrets. So perhaps the truth will always be out of our reach…

Next week: This time I’m not just looking at a conspiracy theory. I’m looking at an actual conspiracy within the US government. And no, it’s not Watergate.