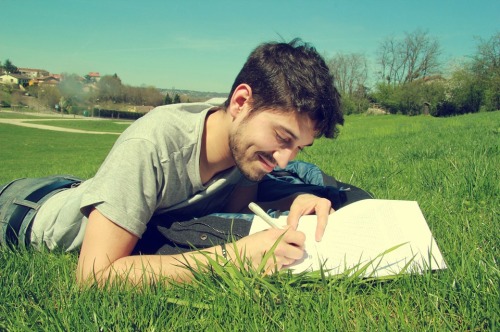 Evening all! So I’m totally going to steal Alan Carr’s catchphrase: What a week it’s been!

I climbed the O2 in London on Tuesday night and got to see the sun setting behind Canary Wharf. Yesterday I did mountain biking, high rope obstacles in the trees, climbing, canoeing, assault courses and a bit of free-falling on a giant swing. Oh, and I got to pretend to be Jon Snow for a bit and do some archery.

Today I’m back at my computer, exercising nothing but my typing fingers so I can tell you about some story updates and a fiction writing bad habit: trying to write a masterpiece.

I’ve been extremely busy with copywriting commitments since January, but now things have quietened down a bit, giving me more time for my novel and short stories. I’m editing the last third of the first novel in The Million Eyes Trilogy as we speak. I’m now thinking I’ll probably finish reading it to my writers’ group and getting their feedback by early next year, if not before.

I said in my last story updates blog that I’d be ready to start the final edit by June of next year, but I reckon I’ll be starting much earlier than that. In the past, I’ve found that January and February are good months to go on long writers’ retreats, so that’s when I’m planning to book a two-week retreat and hopefully get the bulk of the final edit done.

Million Eyes has gone down particularly well with my writers’ group of late, and the fact that increasingly the feedback tends to be minor nitpicks is quite telling about how much my writing has improved over the last year. It’s really exciting to see it all starting to come together.

When I wrote my last story updates blog, limited time had prevented me from being able to do much submitting to short story magazines and competitions. I’ve now managed to find time to submit to a ton of places. I’ve been targeting more general publications and competitions because, as I explained last time, I’ve realised that perhaps The Million Eyes Short Stories aren’t sci-fi enough for a lot of the big sci-fi and fantasy mags.

I’ve also completed a new Million Eyes short story entitled Eryl Mai’s Dream, which is one of the ones I’ve been submitting left, right and centre. This is inspired by the true story of Eryl Mai Jones, who is said to have had a premonition about the Aberfan disaster in the 1960s. (My previous blog, The sixth sense – is it possible to see the future? tells the story of little Eryl Mai.)

Finally, I have an announcement about one of The Million Eyes Short Stories to share with you soon…

How trying to write a masterpiece leads to “overwriting”

It’s only really dawned on me in the last couple of years that a lot of writers do this when they’re starting out, including me. It’s thanks to all the feedback I’ve got from my writers’ group, plus editors, fellow authors and friends who have read and critiqued my work that I’ve realised where I was going wrong.

It’s natural that writers want to impress with their writing. But for writers who haven’t yet honed their style, trying to impress can lead to “overwriting”. This basically means an abundance of unnecessary description, unnecessarily complex words, too many adjectives and adverbs, and overly long sentences.

Big words
By all means, have your thesaurus and dictionary open so that you have a rich source of vocabulary to hand. But don’t insert a complex or less common word for the sake of it, because you think it makes your prose more interesting. Do it because it best describes or reflects your character or situation. A good way of avoiding unnecessary big words is thinking about whose perspective you’re writing in. If you’re writing in 3rd person limited or 1st person, you need to be using the language of the character. If you’re writing from a child’s perspective, for instance, he or she isn’t going to be using complicated words.

For instance, “the woman ran swiftly” could become “the woman sprinted”. “Speak softly” could become “whisper”. “Gentle rain” could become “drizzle”. Instead of “he was frightened”, say “his chest tightened and his knees shook”. What’s more is that over-insertion of adverbs and adjectives can lead to redundancies. Do you need to say “radiant sun”? Surely the sun is always radiant. Do you need to say, “the man blared loudly”? The word “blare” already indicates loudness. It’s like saying “he dived into the wet water”.

Over-describing
Sometimes a writer’s compulsion is to describe settings, events, characters and scenes in elaborate detail, particularly if it’s a real setting or a real-life event you’ve had to research — you want to make your research worthwhile. However, you should only do that where it’s necessary to advance the plot or flesh out a character, otherwise it’s padding and quickly starts to look like you’re ‘showing off’.

Indeed, there are plenty of readers who skim over bulky description that is nothing but scene-setting, so you risk losing readers’ attention if you over-describe. Sometimes a lot of description is necessary for the reader to understand the plot or a character, but break it up with character thoughts and dialogue. Then you don’t overwhelm the reader.

In a nutshell, don’t try to write literary art. Just write a story.

Next week: Virginia Dare and the ‘Lost Colony’