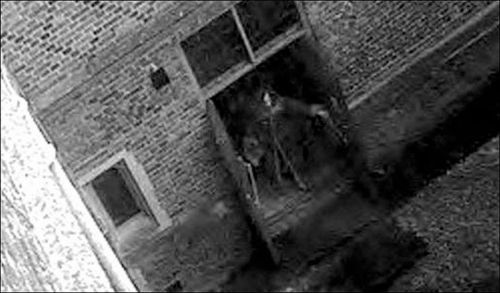 Hampton Court Palace in Greater London is famous for its ghosts, but there’s never been any hard evidence—only eyewitness sightings. That is, until 2003, when a ghost dubbed ‘Skeletor’ popped up on the palace’s CCTV…

In the early 1500s, Hampton Court was built by Cardinal Wolsey for King Henry VIII and became the king’s favourite residence. Probably its most famous ghost is Katherine Howard, Henry VIII’s fifth wife, and it was at Hampton Court that he was told about Katherine’s infidelity. Unlike Anne Boleyn, the first of Henry’s wives to lose her head, Katherine is generally considered guilty of doing the dirty deed behind the king’s back.

Katherine was put under house arrest at Hampton Court but escaped her guards and ran down what’s known today as the Haunted Gallery, looking for the king so she could plead for her life. She was dragged screaming back to her room and not long after became the second of his wives to become a head shorter.

It’s said that visitors have seen Katherine running through the gallery, heard her screaming or experienced “eerie feelings”. She’s often spotted on each anniversary of her house arrest. In 1999, two visitors fainted—half an hour apart—on exactly the same spot. On another occasion, a radio interview being conducted in the gallery had to be shut down because all the equipment stopped working.

Skeletor is a ghost that has overtaken Katherine’s fame in recent years. In winter 2003, palace alarms alerted security staff to the fact that a set of fire doors had been opened. On investigation, they found that the doors were closed again.

Confused, the security staff viewed the CCTV footage of the fire doors. They found that the doors had blown open inexplicably three times on three consecutive days. Here’s a video of the CCTV (complete with Richard and Judy commentary)…

On the first day, the footage showed the doors flying open with enormous force, but the doorway was empty.

On the second day, the doors opened again. This time a mysterious figure appeared in the doorway, dressed in a 16th century robe, and proceeded to close the doors. The figure was dubbed ‘Skeletor’ because of its resemblance to the He-Man villain (below, as seen in the camp and extremely 80s Masters of the Universe, which starred a pre-Friends Courteney Cox and a pre-Star Trek Voyager Robert Duncan McNeill).

On the third day, the doors swung open again but there was no sign of the ghostly doorkeeper.

At the time, Skeletor’s appearance at Hampton Court was widely reported in the media and gained worldwide notoriety. Today his true nature is still under debate. Was this an actual ghost caught on film? Or a tour guide in a period costume who went and closed the doors before the security guards got there? I mean, if it was a ghost, it was certainly a very helpful one.

Obviously nobody has come forward to say, “Oh yes, sorry, that was me! My bad.” But that could just be because of Skeletor’s fame. He’s the latest in Hampton Court’s tourist-attracting history of hauntings. And apart from his historic costume and strange face (which could easily be a Halloween mask or something), he doesn’t look particularly ghostly. A lot of ghosts caught on film (like the infamous Brown Lady of Raynham Hall) appear see-through. Skeletor’s solid as a rock.

Reportedly the security guards have said that there  were no actors or tour guides around at that time. Could they have known that? Might they be fibbing in order to nurture this into a nice little legend? Is this nothing more than a light-hearted hoax? Weirdly, a visitor wrote in the palace’s visitor book on the second day that she thought she’d seen a ghost in that area. A curious coincidence?

Of course, even if Skeletor is as human and alive as they come, one question remains.

Who or what opened the doors in the first place?

Next week: story updates and the benefits of joining a writers’ group

2 thoughts on “Ghost caught on CCTV at Hampton Court Palace”