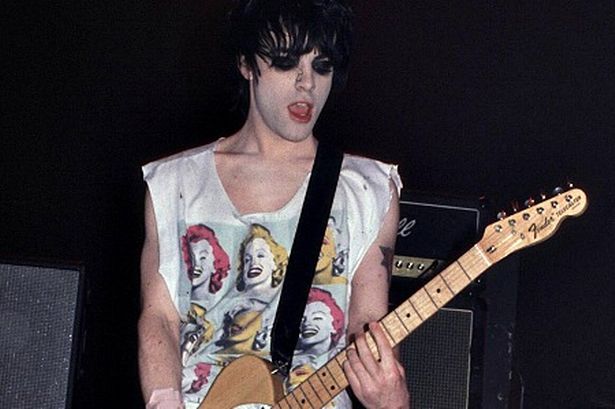 Richey Edwards – former guitarist and lyricist for the Welsh rock band Manic Street Preachers – was known for having an air of mystery. On 1st February 1995, he became the centre of a new mystery – his own disappearance…

Known for his eyeliner-heavy ‘Emo’-look, his enigmatic persona and his politically charged lyrics, Richey Edwards was the guitarist who couldn’t play guitar (he mimed during many performances). He struggled with bouts of depression and admitted self-harming with blades and cigarette butts. He also famously carved ‘4 REAL’ into his arm with a razor blade during an interview with NME journalist Steve Lamacq, requiring 15 stitches.

On February 1st 1995, the day he was due to fly to the US for a Manic Street Preachers promotional tour, Richey checked out of the Embassy Hotel in London and disappeared. He is understood to have withdrawn £200 – so that he now had £2,800 – before driving to his apartment in Cardiff to drop off some things and leaving again. Over the next two weeks, several unconfirmed sightings were made. Richey was supposedly spotted at the passport office and the bus station in Newport, Wales.

Then, on 7th February, a Newport taxi driver picked up a passenger who looked like Richey from the King’s Hotel and drove him around the South Wales Valleys, including Blackwood where Richey used to live. The driver said the journey was “extremely strange”, that the passenger was slim with a gaunt face, was putting on a Cockney accent and asked to lie down on the backseat. He dropped the passenger at the old, now closed Severn View service station – at that point a large and busy stop-off for travellers going over the Severn Bridge – and the passenger paid the £68 fare.

On 14th February, Richey’s Vauxhall Cavalier was given a parking ticket in the car park of the Severn View service station. On 17th February, it was reported as abandoned. Police found that the battery was flat, and there was evidence that the car had been lived in. Burger wrappers and pictures of Richey’s family, taken a month before, were also found.

Did Richey Edwards jump off the Severn Bridge?

The Severn Bridge is known for being a common spot for suicides, and many believed that Richey Edwards took his own life by jumping off the bridge into the River Severn. He was clearly pretty messed up…

Less than a year before his disappearance, Richey went missing for 48 hours in July 1994, reappearing after two days of heavy drinking and self-mutilation in what was thought to be a suicide attempt. He was committed to a psychiatric hospital and missed several gigs and festivals with the rest of the Manic Street Preachers.

On 24th November 1994, after a show in Amsterdam, the band discovered that Richey had cut himself vertically down his chest – the injury needed 36 stitches.

On 1st December, Richey was found by one of his bandmates outside their hotel in Germany, banging his head against the wall repeatedly – with blood all over his face.

Sounds like one seriously disturbed guy. But what raises doubts over the suicide theory is that a lot of people who knew him argued that he was never the type to contemplate suicide. In 1994, Richey also said himself:

“In terms of the ‘S’ word, that does not enter my mind. And it never has done, in terms of an attempt. Because I am stronger than that. I might be a weak person, but I can take pain.”

But if it wasn’t suicide, what happened to Richey Edwards?

Richey Edwards and the New World Order – was he murdered?

Not helping things is the fact that Richey Edwards’ body was never found. It’s not uncommon for bodies to be discovered many years later after people have jumped off the Severn Bridge, but more than 20 years have now passed since Richey Edwards went missing. Still no body.

Where there is mystery, there are conspiracy theories. Some people suggest that Richey Edwards had key information about the New World Order, and was eventually killed for it. New World Order, a conspiracy theory in itself, says that a secret, powerful group is actually in control of the world, or on the verge of taking control. Variations include Satan’s minions secretly pulling the strings of world governments in preparation for the coming of the Antichrist, and the British Royal Family being part of a secret cabal of disguised reptilian aliens.

Some argue that if you study Richey’s lyrics in many Manic Street Preachers’ songs, such as If White America Told The Truth For One Day Its World Would Fall Apart, he is attacking New World Order. They argue that maybe government agents targeted him because the revelations in his lyrics were making them nervous.

Is he still alive?

The most common theory is the Elvis-esque notion that Richey Edwards is still alive. Many discount this as fans wanting him to be alive – just like Elvis and Michael Jackson – and refute all the alleged ‘sightings’. However, since Richey’s body has never been found, the ‘still alive’ theory is much more plausible.

An Oxford University undergraduate also theorised that Richey was hiding in Germany. She said that he went there to visit places significant to the Allied Forces’ liberation of the concentration camps, which he’d studied at Cardiff University.

But all of this is speculation, together with sightings that have never been confirmed. For a long time, his family refused to have him declared legally dead, hoping that one of the leads would prove fruitful. Alas, nothing new came to light and in 2008, Richey was officially declared “presumed dead”.

Despite the conspiracy theories about New World Order and speculations that he might be alive, my feeling is that Richey committed suicide (until substantive new evidence comes to light, of course). He was clearly a screwed up guy; he had pictures of his family in his car; and if we believe this taxi driver, he visited his home town shortly before his final stop at one of the UK’s most renowned suicide locations. Whatever he might’ve said about suicide, his actions, including some horrific self-mutilation incidents, suggest he definitely had the capacity to throw himself from the Severn Bridge in despair.

Having said that, I do have one question. If he was planning to commit suicide, why did he withdraw £2,800?

Next week: The Resurrection conspiracy

16 thoughts on “Manic Street Preachers’ missing guitarist – did he jump or was he pushed?”