In 2003, a skeleton was discovered near an abandoned church in the deserted town of La Noria, in the Atacama Desert in Chile. It had a vaguely human shape, except for having 10 ribs instead of 12, an abnormally large and pointed head, and being only 6 inches in length.

Many suspected that the Atacama skeleton was an alien, because of its unusual features. However, immunologist Garry Nolan carried out extensive DNA analysis, finding abundant human DNA, and revealed in 2013 that the Atacama Alien – dubbed ‘Ata’ – was very much of this world. The body’s mitochondrial DNA also revealed that its mother was from the west coast of South America, i.e. Chile. But this has not put a lid on the mystery, given the tiny human’s bewildering features.

So what exactly is Ata? 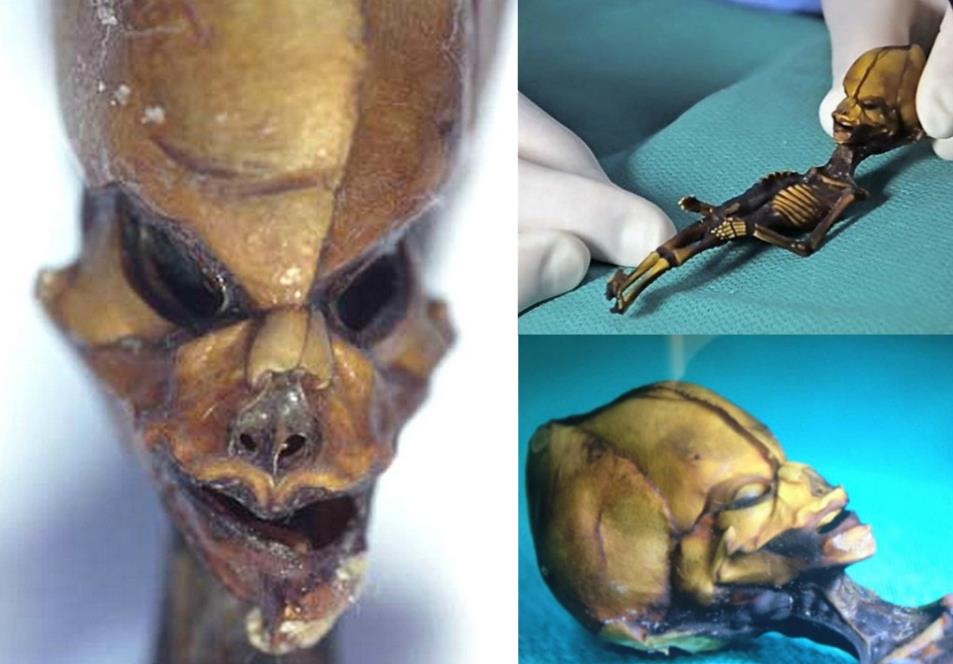 An extinct species of human from hundreds of thousands of years ago?

Perhaps Ata belongs to another species of human that existed tens or hundreds of thousands of years ago. Humans that were much smaller, had larger heads and had 10 ribs instead of 12. It would have been a rare species, given that Neanderthals and other extinct species of human have been excavated in copious numbers across the world, but no other Atas have been found.

I say no other. A similarly tiny, deformed corpse dubbed Aleshenka was discovered near Kyshtym in Russia in 1996 – perhaps another member of Ata’s elusive species? However, while there is video and photographic evidence of Aleshenka, the remains of the creature were mysteriously lost after 1996 – which means it cannot be verified as human, alien or even an elaborate hoax.

In any case, the answer is no. Garry Nolan confirms that Ata’s DNA is modern. He too initially presumed that Ata was tens or hundreds of thousands of years old, preserved because of the Atacama Desert’s exceptional dryness. But his analysis indicates that Ata – whoever he or she was – lived and died only a few decades ago.

A dwarf or a human foetus with progeria?

This bizarre, tiny human is the size of a 22-week-old foetus. Some scientists have suggested that Ata is a foetus that was born prematurely and didn’t survive.

However, Garry Nolan’s analyses continue to produce confusion. He found that the density of the growth plates in Ata’s knees is equivalent to that in a 6 to 8-year-old child. A 6-inch tall 8-year-old?

One of Nolan’s theories is yes, Ata was a 6-inch tall 8-year-old. As strange as it sounds, perhaps Ata suffered from a very extreme form of dwarfism. Still, the idea that a person as tiny as 6 inches could have been living in Chile a few decades ago without attracting the world’s attention beggars belief.

Nolan’s other theory is that Ata was a foetus, but was suffering from a severe form of the rapid aging condition, progeria, which is why features of its skeleton resemble that of an 8-year-old.

However, the mystery deepens. Nolan has not been able to confirm either of these theories because no indications of progeria or dwarfism have been found in Ata.

Nolan discounts this one immediately. Some have argued, because of Ata’s alien-like features and inexplicable origins, that it might be a hoax conjured up by ufologists. Nolan argues that the x-rays clearly show real bones with arterial shadows and says, “You just couldn’t fake it,” before adding with a laugh, “unless you were an alien.”

Did something happen in La Noria?

Even though Aleshenka’s existence cannot be verified due to the loss of the remains, people still theorise about its origins. One theory is that Aleshenka was a human foetus with bizarre deformities due to long-term radiation exposure following the Kyshtym disaster of 1957, which seriously contaminated the area.

Did something similar happen in La Noria? Just what did happen in La Noria? Records indicate that it used to be a major mining town in the late 1800s, and today it is said to be haunted by the workers, who were badly mistreated to the point of slavery. The last residents of La Noria are said to have abandoned the town in the 1950s. Why? The cemetery in La Noria is considered one of the most frightening places in the world, thanks to the toppled-over gravestones, open graves and clothed bodies only half-buried in the ground. The residents of the village nearest to it refuse to ever go there.

Was Ata the result of some kind of experiment conducted in La Noria? Were Ata’s features because of radiation exposure following some kind of accident? Was Ata’s condition completely natural yet utterly unique – a rare condition as yet undiscovered?

The other question is what actually happened to Ata. What we know is that someone in La Noria wrapped the body in a white cloth with a purple ribbon and buried it in a shallow grave near the church. What we also know – most disconcertingly – is that Ata had a fracture on its upper arm and another fracture on its skull – which doctors and scientists consider to be a possible cause of death.

My theory is that someone murdered Ata out of fear of what it was. Or, if Ata was the tiniest human to have ever lived, perhaps he or she was walking down the street one day and was accidentally trodden on.