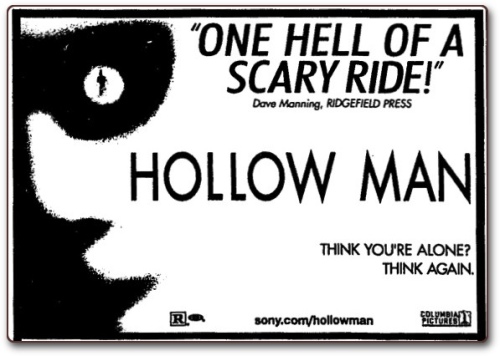 Between 2000 and 2001, several movies were released by Columbia Pictures that were not very well received by film critics. Well, apart from one. Journalist David Manning heaped high praise Hollow Man (2000) and The Animal (2001) even though no one else did. Did he just have bad taste? No. David Manning wasn’t really there…

David Manning was a journalist for the Ridgefield Press, a small weekly newspaper in Connecticut. He called Hollow Man “one hell of a scary ride!” He called The Forsaken (2001) “a sexy, scary thrill ride!” And he said this of The Animal: “The producing team of ‘Big Daddy’ has produced another winner!” This is while other critics were savaging them, particularly The Forsaken, which has a dismal 8% rating on review site Rotten Tomatoes.

Manning’s comments were used prominently in posters and advertisements for the films, and this is how they attracted the attention of Newsweek reporter John Horn. He was particularly suspicious of Manning’s comment about The Animal, because the film had not been screened for critics.

He decided to investigate Manning and contacted the Ridgefield Press, at which point he learned the truth. The newspaper had never heard of him. No other reporters had heard of him either. In fact, David Manning was as invisible as Kevin Bacon in Hollow Man.

John Horn investigated further and discovered that David Manning was the product of a marketing conspiracy. Josh Goldstine and Matthew Cramer, two marketing executives at Sony Pictures (Columbia’s parent company), had invented David Manning and concocted all his ‘reviews’. It’s unclear whether anyone else at Sony knew about the deception. As soon as the truth was uncovered, Cramer and Goldstine were suspended and Sony pulled the ads.

The story didn’t end there. Two moviegoers decided to bring a lawsuit against Sony, claiming that they went to see Heath Ledger movie A Knight’s Tale (2001) because of David Manning’s bogus review blurbs. (A Knight’s Tale was actually quite popular with audiences and critics, but these two moviegoers obviously weren’t fans.)

While Sony did not admit liability, an out-of-court settlement was reached. Sony agreed to pay $1.5m to dissatisfied moviegoers ($5 each) who had been to see the movies that were positively reviewed by Manning. It also agreed to pay fines of $326,000 to the state of Connecticut for the deception.

And so David Manning is now an embarrassing marketing misstep in Sony’s history books. But does he also indicate that we may be surrounded by deceptive marketing – flagrant lies about the products and services we use every day – that we just haven’t cottoned onto yet?

Next week: Was Pope John Paul I murdered?